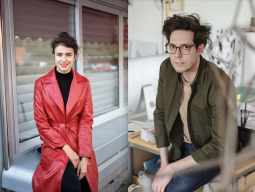 I have several curatorial focuses in 2021 and I would include them in this residency. Firstly I’m interested in developing programs that intertwine artists and ecologists, botanists and environmental activists. I would be interested in exploring similar practices during the residency and potentially connect with artists/curators/researchers that I can invite to do the residency in Zagreb and join future projects related to seed politics I’m curating together with ZMAG (Green activist network). Secondly I am interested in connecting with the photography scene in Vienna and artists/curators working in that field. I’m one of the curators of the international photography festival Organ Vida and during 2021 I will be planning a new festival edition (2022) so I’d like to meet potential collaborators and open new possible festival partnerships. My third curatorial focus for next year are contemporary art practices that explore textile and related materials as an artistic medium. I’m a researcher at CIMO (Centre for research of fashion and clothing) and for the past two years we were developing a project titled Briefing on Soft Arts. We embrace the traditional link with the field of textile art, but at the same time we attempt to abolish or expand it so as to consider and challenge it within contemporary art practices. During the residency I would be interested in exploring artists working with textile and related materials and connect with similar initiatives in the context of Vienna.

Áron Kútvölgyi-Szabó’s diverse works can be considered as a continuous long term-project started around 2012. His interest is revolving around two topics: the concept of knowledge and the relationship between imagery and spatiality. In his framework this two is deeply entangled and can be grasped through a sort of critical perspectivism, which is partly a spatial sensitivity and awareness and partly a critical approach towards the defective and arbitrary nature of image-based sources. During the years he examined these from several points of view both in theory and practice. Currently this inquiry culminates in his doctoral research on the phenomena of post-truth, alternative facts and conspiracy theories.

At the end of his sculptural studies, he was creating welded metal structures visualizing the hidden, intangible layer of personal mindsets as mental networks and also the constructed nature of human thinking. In his later projects he was investigating the fallacy of perception and remembrance as well as the various cognitive distortions which are shaping our general worldview and our beliefs on a daily basis. He was also working with epistemic problems and the concepts of counterknowledge and counterfacts, which we can observe by the climate change denialists, QAnon believers or flat earthers as competing alternative narratives against the scientific consensus. Lately he was focusing on the symptoms of the current post-factual era and its antecedent: artificially induced doubt, hyper-skepticism, science denial, and the increasingly fluid and weightless notion of fact and truth.

Due to his former studies in the field of philosophy and humanities his approach is mostly research-based and conceptual. He uses a wide range of materials and visual tools, often mixes manual and digital techniques and also incorporates site-specific elements. Recently he has been shifted towards photography, the use of graphic design and 3D software, resulting in framed collages and wall mounted vinyl cuts. His artistic practice is still primarily based on mixed-media installations where the viewer needs to walk around the space to reveal all the layers and possible aspects of the artwork, especially since the arrangement of the elements followes an inner linkage. This sums up the core of his method, where the change in perspective and the way we are connecting the dots are the key factors to determine any kind of meaning.

In the last couple of years, my works were revolving around the topic of post-truth, alternative facts, and conspiracy theories. Both in theory and practice, I’ve been particularly interested in the role of images and spatiality in knowledge creation and the formation of opposing alternative interpretations. These subjects are part of my long-term artistic research which I currently pursue in the framework of my DLA (PhD) program at the Hungarian University of Fine Arts, under the title Post-Truth Phenomenon in the light of critical perspectivism.

As I’m getting closer to finalize my thesis and start writing my dissertation I believe it would be crucial to discuss my findings with other non-Hungarian professionals, who could have a different perspective on the field. Therefore my primary goal for the residency program is to consult and hopefully collaborate with several Vienna-based academic researchers working at Universität Wien.

Beside these promising conversations, I also plan to develop a new body of work during my stay in Vienna. My aim is to grasp the artificially induced doubt ‘as a product’ (such as hyperskepticism or anti-expert sentiments) as it appears in various levels from the field of science to political communication. I intend to work with the toolset of PR and advertising industry in a way that can reveal the underlying methods and practices of the present-day ‘merchants of doubt’. Since Austria has always had an outstanding and progressive visual communication / graphic design scene, I believe it will be very helpful to immerse myself in those visual impacts during the development of the project.

You can find more Information about Áron Kútvölgyi-Szabó here