We would like to inform you about two international awards for the book "Atlas of transformation" (Czech version) and "Atlas of Transformation" (English version), published by tranzit.cz, editors Zbynek Baldrán, Vit Havranek, graphic designer: Adela Svobodova.

“Atlas of Transformation“ (English version) – The Most Beautiful Swill Books of the year 2010; The Swill Federal Office of Culture, Zurich (ch)

„Atlas transformace“ (Czech version ) GOLD MEDAL – The Best Book Design from all over the World of the year 2010; The Stiftung Buchkunst, Leipzig (de)

The Swiss Federal Office of Culture (FOC) annually conducts the competition «The Most Beautiful Swiss Books». It thereby recognizes excellence in the field of book design and production, as well as drawing attention to remarkable and contemporary books by Swiss designers, printers and publishers. The inde-pendent jury chose a total of 19 books as the most beautiful Swiss books of 2010. Subsequently, the awarded books were entered in the international com-petition of the Stiftung Buchkunst in Leipzig

391 books were entered into this year's competition by Swiss designers, publishers or printers. The five-member jury, chaired by graphic designer Cornel Windlin, exam-ined each entry and conferred the title of most beautiful Swiss book of 2010 on a total of 19 books. Of these 19 books, at least half of them were designed or co-designed by female designers; the jury was also struck by this year’s excellent output by graduates of design academies.

The jury takes into account each book's overall concept, graphic design and typogra-phy, and pays particular attention to innovation and originality. Further criteria include the quality of the printing and the cover, the binding and the materials used.

From 24. to 26. June 2011, the The Most Beautiful Swiss Books will be exhibited at the Helmhaus Zürich, alongside the simultaneous publication of the catalogue show-casing the competition. The new catalogue will be designed by Aude Lehmann.

…more information can be found at: http://www.swissdesignawards.ch/


Best Book Design from all over the World, Leipzig 2011

Unique of its kind in the world, the annual book design competition “Best Books from all over the World” has been held in Leipzig since 1963. Since 1991 the Stiftung Buchkunst in Frankfurt am Main and Leipzig has been responsible for overseeing it. The international competition assesses books which have previously been judged and singled out for merit by specialist panels in their respective countries of origin.

In 2011, an independent international jury again convened in Leipzig with the task of selecting fourteen outstandingly designed books from 596 of the best books from 32 countries: the best of the best.

…more information can be found at: http://www.stiftung-buchkunst.de/

Notes
Atlas of Transformation is a book with almost 800 pages. It is a sort of global guidebook of transformation processes reflecting socio-political and cultural transitions in different regions. With structured entries, its goal is to create a tool for the intellectual grasping of the processes of social and political change in countries that call themselves “countries of transformation” or are described by this term.

The Atlas of Transformation contains more than 260 “entries” and key terms of transformation and in 2009 was published in Czech. Several dozen authors (more than 100) from the whole world contributed to this book and also some influential period texts were republished here.

The book was published in September 2010 in co-operation with the Swiss publishing house JRP-Ringier. 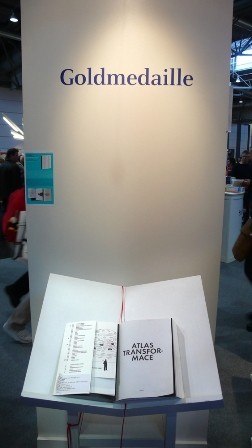