Narratives and Ghosts from the International Art Exhibition for Palestine, 1978

The booklet accompanies the exhibition Cartography of Artist Solidarity curated by Kristine Khouri and Rasha Salti. Cartography of Artist Solidarity is an archival and documentary exhibition that begins from an excavation of the story of the International Art Exhibition for Palestine (Beirut, 1978) and proposes a speculative history of politically engaged artistic and museographic practices in the milieu of the international anti-imperialist solidarity movement of the 1970s. The exhibition takes us back to the era of the Cold War, a time when cultural diplomacy was an important instrument of competition and mediation between the ”great powers.”
Cartography of Artist Solidarity is the outcome of several years of research conducted by writers and curators Kristine Khouri and Rasha Salti. The research also reconstructs the stories of the Museo Internacional de la Resistencia Salvador Allende, the internationally touring exhibition Art Against Apartheid, the artist-run Salon de la Jeune Peinture in Paris, and radical artist collectives such as the International Brigades of Anti-Fascist Painters. In addition, Cartography of Artist Solidarity proposes to revisit the intersecting roles of cultural diplomacy, grassroots international solidarity actions, and the role of artists in the 1970s and 1980s in Hungary. Artist Andreas Fogarasi also presents a new work that reflects on Hungarian artist, Gyula Hincz’s participation in the 1978 Beirut exhibition. 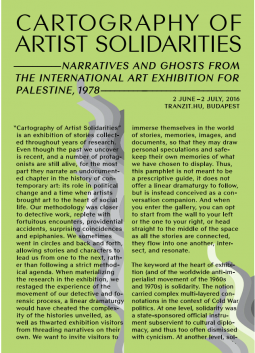