METASITU: Ecumenopolis – The Whole World is One City

The Whole World is One City

The publication connects to the exhibition METASITU: Ecumenopolis – The Whole World is One City—on view at tranzit.hu from November 4 to December 9, 2016—that presented an overview of the research theme and activity of the Athens-based METASITU, an international collective of urban research, art, and curatorial practices. The show and the publication revolve around unearthing how the intricately intertwined and frequently hidden networks of global neoliberal capital and nationalistic agendas shape the world around us and, at the same time, how we inhabit and use these very structures, often unconsciously.

The group departs from the concept of Ecumenopolis, a term coined in 1967 by the Greek post-war architect Constantinos Apostolou Doxiadis, which was a utopian idea that the world's cities in the future would form together into one total city. As a step further, the collective postulates that the spatial manifestation of power mechanisms is the most discernable in urbanization processes: a transformation of the urban realm into an all-encompassing layer of our contemporary reality worldwide. This process and the condition METASITU labels “Ecumenopolis,” that also asks to rethink the core definition of what urbanism is.

The publication comprises an introductory text by METASITU on their re-purposed concept of Ecumenopolis, an essay by anthropologist Balázs Anna on the contextualization of the collective's practice within urbanism, an interview with METASITU by curator Eszter Szakács, as well as the descriptions of the video essays presented at the exhibition at tranzit.hu. 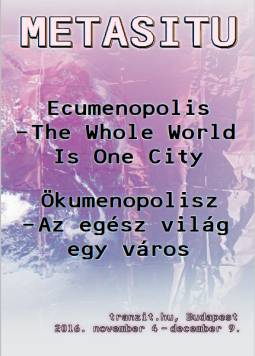