exhibition in a newspaper format - - SOLD OUT

This publication is an exhibition issued in newspaper format, which, in addition to documents of progressive art events that happened in Hungary in the 60ies and 70ies, contains two illustrated essays written by the curators (How Art Becomes Public by Dóra Hegyi and Zsuzsa László, “Other” Revolutionary Traditions by Sándor Hornyik) that discusses the political and social background of these events. The newspaper format considers the immediacy with which events and artworks reflected on the daily reality of their time, and also attempts to restore the then missing public appeal of these progressive practices.

The project Parallel Chronologies was launched to map, study, and generate curatorial and artistic practices and methodologies dealing with Eastern European art exhibitions and events between the 1960s and 1980s. Our goal was to present an international network of professional relationships, documents of exhibitions, events, and art spaces instead of the mere display of artworks from the period. We also attempt to propose a methodology with which documents and factual information as well as legends and cults can be researched, processed and displayed in an exhibition. The project started in 2009 with an email-inquiry - also published here - asking Hungarian art professionals belonging to different generations and subcultures about the art events of the period that they find the most significant in relation to their own practice. Instead of aiming at an objective history gained from the synthesis or reconciliation of differing individual points of views we rather intended to trace the idiosyncratic pattern of disagreement and accordance, the map of blind-spots and legends.Parallel Chronologies was first presented as a research exhibition and symposium in Budapest, in 2009 connected to the international collaboration “Art Always has its Consequences“.The research exhibition was staged again in the Badischer Kunstverein, Karlsruhe, in 2010. In 2011 we continued the project in the framework of a new collaboration, “Recuperating the Invisible Past” and realized a new exhibition in Riga Art Space completing our chronologies with those of our partners, LCCA, Riga, Art History Institute, Tallinn, and Vilnius National Art Gallery. The Tranzit.hu part of the exhibition was realized in this newspaper format, and it also included Sándor Hornyik’s project”Other Revolutionary Traditions”. 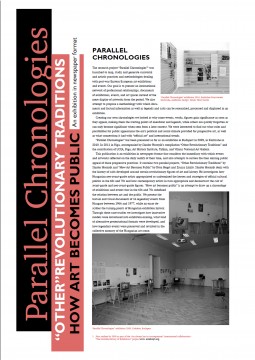