The second work in the series Post-colonial Thought I–IV, the introductory volume of which was a translation of the book by Frantz Fanon Black Skin, White Masks, constitutes a historical starting point reflecting the engaged genesis of post-colonial thinking as a de facto emancipatory programme of the second wave of “de-colonisation” – the armed and political process of the struggle of colonial countries for independence, which was perceived in the West as a process involving the disintegration of European empires.

These processes took place in Asia and Africa from the end of the World War II (1946 Philippines, 1947 India, Pakistan, etc.) to mid-way through the seventies. During this phase the post-colonial authors contained in the book articulated a perspective of liberation from literal and symbolic colonial dominance, from systems of subordination, control, inhuman organisation and oppression. A freedom movement also contains within itself the fundamental question of post-colonial identity – on what basis will a new, liberated politics of (national) identity evolve and be constructed? On what ground plan will the concept of a post-colonial nation crystallise – on the basis of national essentialism (pre-colonial ethnic, linguistic, national, tribal “roots”), or on a constructivist basis (as an imagined commonwealth)? These two largely incompatible conceptions are indicative of problems which will resonate with witnesses of and participants in post-socialist transformations after 1989.

The publication contains classic texts defining the themes of universality and difference, resistance, language as an epistemological and imaginative structure of power, etc. A specific feature of this collection involves two local perspectives on the post-colonial situation, namely the role of author and communism (or the inheritance of the totalitarian regime and the stereotypical ideologies formed within the framework thereof).

Special Notes: The book was published with the support of the Ministry of Culture of the Czech Republic. 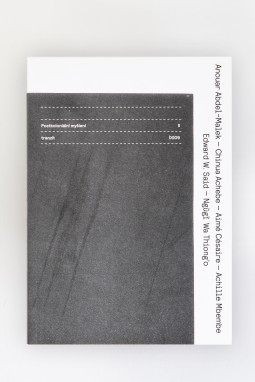