In conjunction with the exhibition “Report on the Construction of a Spaceship Module,” an experimental archive of tranzit’s ten-year history, the network presents a symposium featuring talks by noted international curators and artists, all of whom they have collaborated with in the past. The exhibition mobilizes the metaphor of outer space to present utopian or dissenting visions by artists. Coextensively, each speaker in the symposium has endeavored to create a rupture in the space-time continuum of their existing cultural system. Case studies will center on past projects that have aimed to recover or reveal muted social narratives and the unique, quasi-archaeological role that curators can play in excavating and displaying such sidelined histories. Spanish curator Arakis will comment on a feminist model for the field of art carried out at the Centro Cultural Montehermoso Kulturunea in the city of Vitoria-Gasteiz (2008 – 2011), architect Catarina Simão will discuss her ongoing efforts to make public the Mozambique Film Archive, French curator Guillaume Désanges will discuss how his curatorial practice intertwines with psychoanalytic study, the Technical Assistant of the Museum of American Art will speak on exhibiting relics of the early days of the Museum of Modern Art and its touring exhibitions of American art that traveled Europe during the 1950s.The session will be introduced and moderated by Vít Havránek and Georg Schöllhammer, directors of tranzit.cz and tranzit.at.

The talks will be followed by the launch of a publication by Ion Grigorescu, Diaries 1970–75, edited by Georg Schöllhammer and Andreiana Mihail and published by Sternberg Press. Location: of the launch: Jadis Wine Bar, 42 Rivington St, New York, NY 10002
Jadis


Sponsors
The presentation of “tranzit: Report on the Construction of a Spaceship Module” is made possible through a partnership with ERSTE Foundation.
Additional support provided by the Ministry of Culture of the Czech Republic.
Artist travel is provided, in part, by the Trust for Mutual Understanding. Additional support for artist travel has been provided in part by Balassi Institute – Hungarian Cultural Center and the Ministry of Culture of Lithuania.

Museum as Hub Funding
Museum as Hub is made possible through the generous support of the Robert Sterling Clark Foundation. Artist residencies are made possible by the Ford Foundation. Support for Museum as Hub and public programs is provided, in part, by the New York City Department of Cultural Affairs and the New York State Council on the Arts. Additional support for artist residencies is made possible by Laurie Wolfert. Endowment support is provided by the Rockefeller Brothers Fund, the Skadden, Arps Education Programs Fund, and the William Randolph Hearst Endowed Fund for Education Programs at the New Museum. Education and public programs are made possible by a generous grant from Goldman Sachs Gives at the recommendation of David B. Heller & Hermine Riegerl Heller. 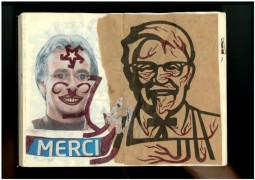