An exhibition by tranzit.org in the framework of THERE IS NO MEANING IF MEANING IS NOT SHARED, Gdansk City Gallery, Poland

The exhibition brings together a flux of artworks, documentaries, video-commentaries and archives selected and produced by tranzit – a network of independent initiatives based in Austria, the Czech Republic and Hungary. The display is conceived as an interface that allows visitors to meet artists and cultural producers with whom tranzit has had inspiring continuous or long-term collaborations. Some artists were commissioned by tranzit to comment on their earlier projects, some were asked to reflect on the invitation itself, others were asked to propose an interpretation of a fellow artist’s work and some to realize new commissions. The flux of videos offers an asychronic narrative. The events, artworks, histories and geographic relations presented are not limited by the often narrow boundaries of the (art) world, rather visitors will find inside a mise-en-scene of the tranzit network’s histories, where the present is understood as an overlap of multiple temporal and spatial frames. Without neglecting context, the exhibition proposes an ahistorical, dysfunctional approach to events, artworks and imaginations, while also recognizing that they have a precise date and locality of origin. It recognizes the confrontation between visions of the future and their development, fading out or suspension. All projected futures are determined by political possibilities latent in the present. Social utopias materialize in design, technology, architecture, urbanism and everyday objects — all of which shape social behavior, and vice versa. The Spaceship places different, and at times contradictory, reflections on social utopias in reciprocal interaction. The Spaceship represents Plato’s famous Ship of State as well as the Ship of Fools — allegories that raise questions about “navigation,” autocracy versus ideology and the lunacy that has driven human communities and societies. 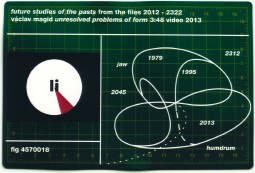