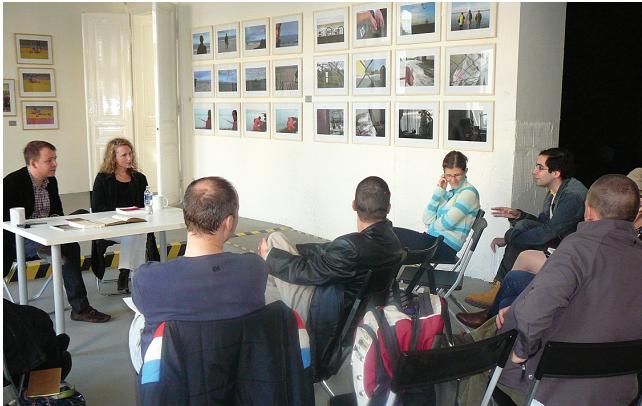 Without Methods. Anders Kreuger and Miriam Bäckström in Conversation with Emese Süvecz

Speculation is frequently the answer to one of the most important questions in art: What is interesting? Insecurity, unease, even ignorance, may be more interesting than their corresponding positives. When art is uninteresting we understand it as having not lived up to its purpose, even if we do not know what this purpose really is. Speculation works rather well when we hope to achieve the freedom and unpredictability that is sometimes the only antidote for meaninglessness.
We would argue that speculation, in these two senses, is crucial to creativity and artistic practice. Speculation, it is true, has more to do with the opaque process of thinking than with the transparent pursuit of knowledge. In The Life of the Mind, Hannah Arendt suggested a definition of thinking which also describes what artists and curators must be able to do: speculate meaningfully about the unknowable. A warning is due, however. Speculation can create meaning and clarity, but also mystification and confusion.

Qualitative notions such as Hannah Arendt’s speculation or thinking, or Henri Bergson’s duration and intuition are closed and unaccommodating in the sense that that they do not yield to quantification. It is perfectly possible to speak of speculation in various contexts, but it is more difficult to tell what the notion actually contains, to enumerate the concrete operations it comprises, to accurately describe the field it covers. The notion of speculation may, in fact, be so open and accommodating that it functions only in art and nowhere else.

We have collaborated, often rather intensely, for the last four or five years. Our collaboration has ranged from the rather conventional division of labor between an artist and a curator to the joint preparation of texts based on in-depth conversations and the complex entanglement of mutual consultation and inspiration. One of the recurring topics in our    conversations is the importance of speculation, as an attitude (speculative thinking as a proactive mirroring of the future, in the etymological sense of the term that derives from the Latin word “speculum”), and as a method (speculation as an act of defiance, a refusal to make do with given topics and approved opinions).

In Budapest, we approach the topic of speculation from two angles. We will use Miriam Bäckström’s recent films Rebecka (2004), The Viewer (2005), and Kira Carpelan (2007) as illustrations of how an artist may use speculation as an attitude and a method. We also perform a close reading, together with the workshop participants, of extracts from Henri Bergson’s last and too-little-known book The Two Sources of Morality and Religion (1932), which is unapologetically based on speculative thinking.

Anders Kreuger is curator of the M HKA in Antwerp, and co-editor of Afterall.
Miriam Bäckström is an artist based in Stockholm, Sweden.