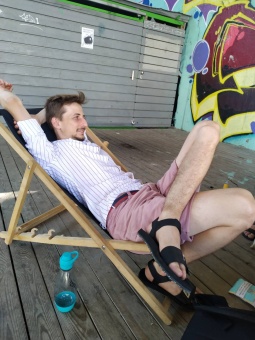 Juraj Mydla is an artist and cultural worker based in Bratislava. He graduated from Intermedia at the Academy of Fine Arts and Design in Bratislava and is currently working mainly in the performing arts. He is a co-founder of the asfd theatre ašttnnkorazd fildj and a member of performative group Marína Abramovič Po Sebe Neupratuje. He collaborates with several independent theater groups in Slovakia, mainly being in charge of on-stage video, and with various other cultural organizations, e.g., magazine Kapitál or tranzit.sk. He is interested in exploring performativity in a broader context, in evolutionary theory and thinking through trans-corporeality.

During the Q21 residency I will be exploring software for making music and live visuals, e.g., VCV Rack – a virtual modular synthesizer, Ableton, Unity and vvvv, with an intent to create an audiovisual performance.

I will also be researching literature concerning interspecies interdependency – namely Lynn Margulis and her theory of symbiogenesis. I am interested, whether views concerning the nonlinearity of evolution can be used in an argument about the need for cooperation or whether that would be just another “appeal to nature” fallacy.