1/9View of the exhibition with an installation by Ivan Kafka. Photo: Jiří Ševčík, VVP AVU Archive. 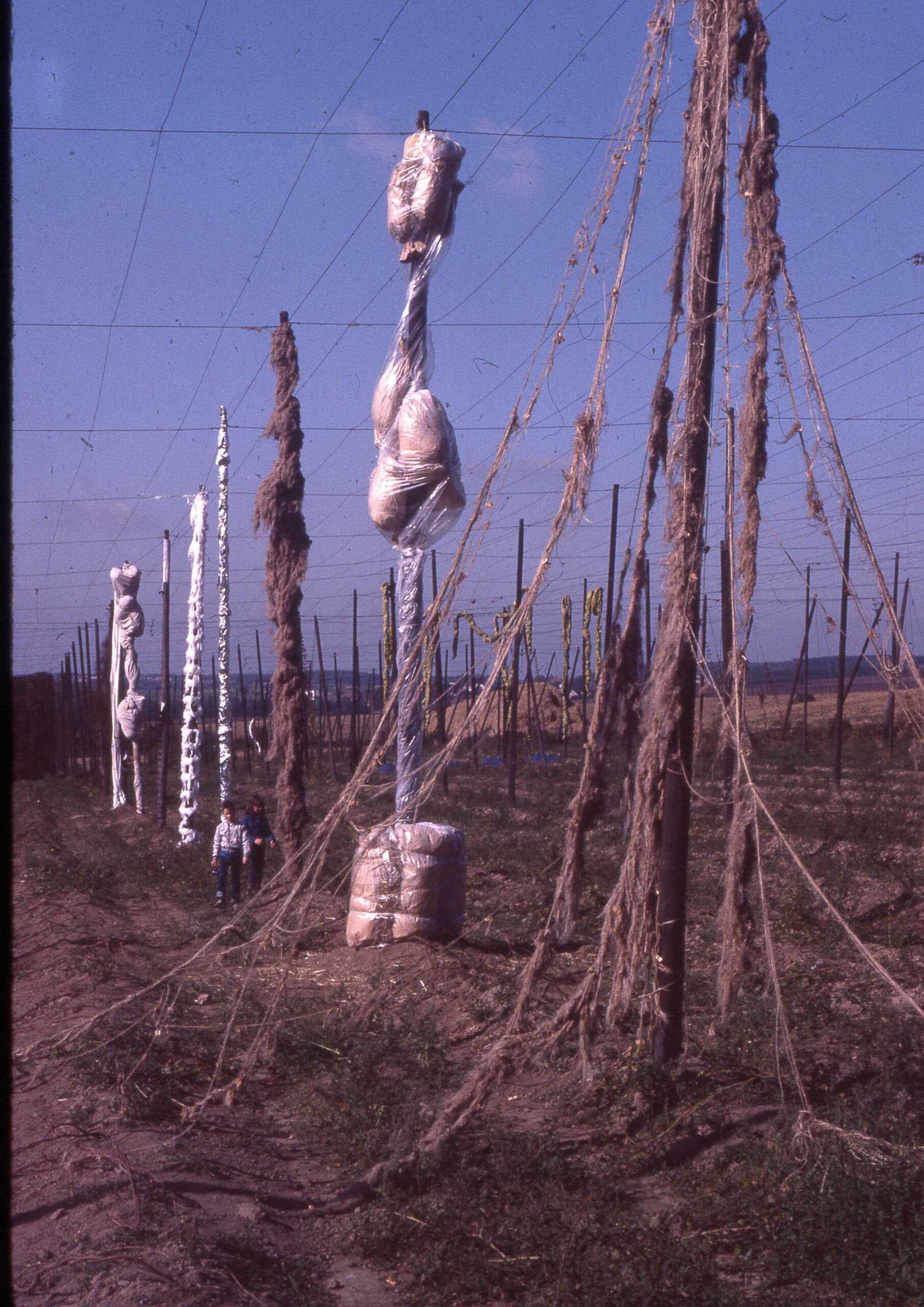 1/9View of the exhibition with an installation by Stanislav Zippe. Photo: Jiří Ševčík, VVP AVU Archive. 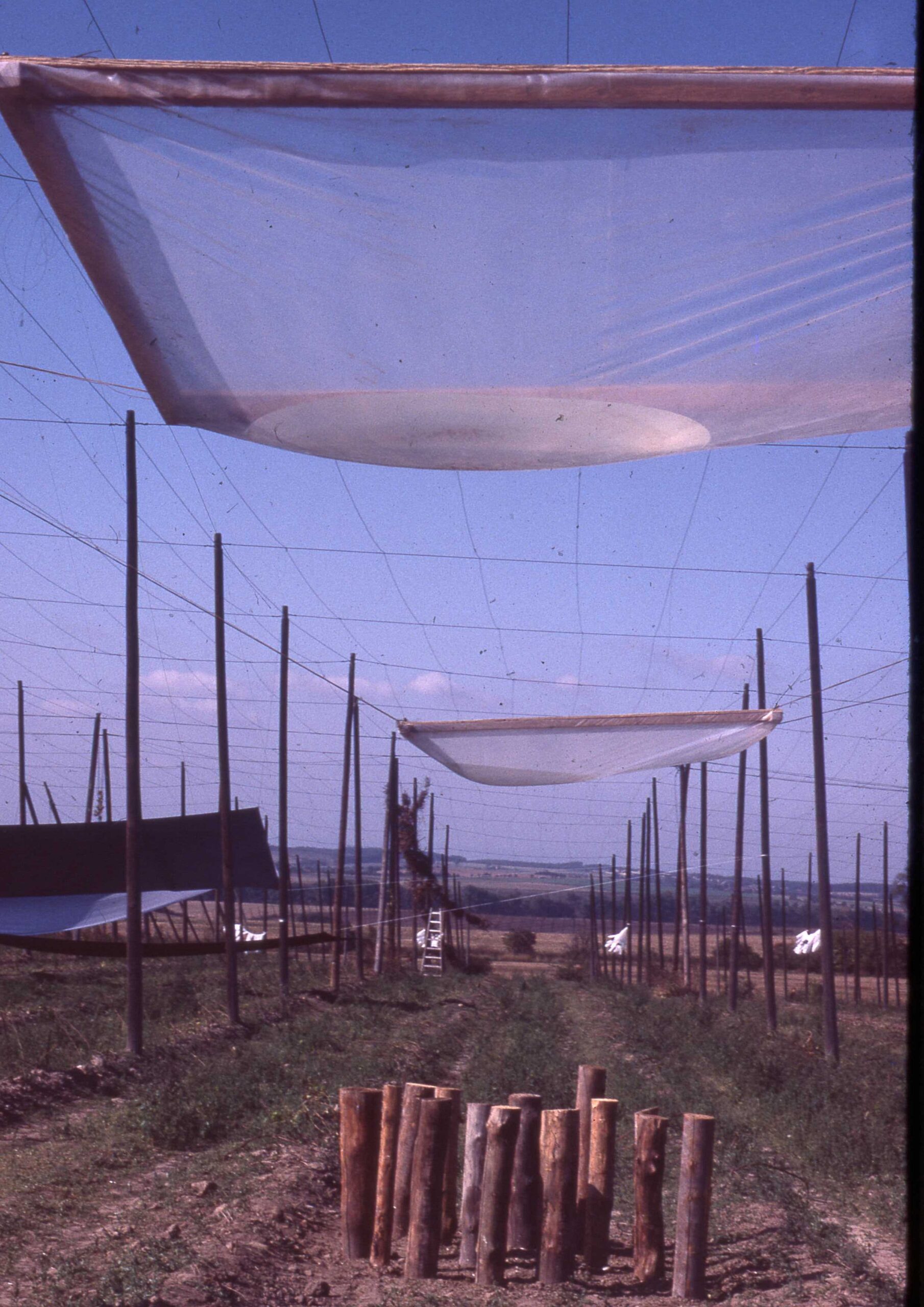 1/9View of the exhibition with an installation by Margita Titlová Ylovsky, in the background works by Kurt Gebauer, Pavla Michálková and Josef Hampl. Photo: Jiří Ševčík, VVP AVU Archive.

1/9Plan of the exhibition. Courtesy of the curator.

The search for a place to exhibit alternative culture resulted in the early 1980s in absurd projects such as the Hop-Field Symposium near Mutějovice that took place in a field after the hops harvest, i.e. in a space marked by poles and wires. It brought together a number of artists who were at that time working with alternative ways of creating art and site-specificity, as well as those for whom leaving behind their studios for the fresh air and a chance to work in a broader collective was a welcomed change from the isolation that was common during the normalization years.

The original idea was to present the works of contemporary unofficial artists on a hop-field along a relatively busy road between Prague and Karlovy Vary, but following the police intervention at A Meeting on the TJ Sparta Tennis Courts exhibition, the artists and curator involved decided to find a somewhat less conspicuous place. Even so, the exhibition did not avoid intervention by the authorities. According to the arrangement with the local agricultural cooperative, it was meant to be open to the public on October 1–16, but it was prematurely closed down by decision of Rakovník’s Regional National Committee on October 6, 1983. The main curator, Marie Klimešová – at that time still using her maiden name Judlová, an important art historian and curator, involved with Czech unofficial scene in 1970s and 1980s – invited to exhibit those artists with a desire to experiment in a monumental land-art installation. As in the case of A Meeting on the TJ Sparta Tennis Courts exhibition, the atmosphere on the hop-field was of a friendly meeting between members of different generations. Working side by side in the hops-field were accomplished artists of the 1960s generation such as Čestmír Kafka (1922-1988) and Stanislav Zippe (1943), as well as those from the upcoming generation: Magdalena Jetelová (1946), Margita Titlová Ylovsky (1957), Tomáš Ruller (1957) and Naďa Rawová (1953). The opening on October 1st saw the congregation of the then artistic and theoretical elite of the unofficial scene and a number of unusual works: monumental figures made from hops by Kurt Gebauer (1941), Suspending by Ivan Kafka (1952) which, like a mysterious church filled a central dug-out cube in the hop-field, an installation bringing to mind American earth art by Vladimír Merta (1957), or the Furrow in which Tomáš Ruller walked from one side of the hop-field to the other.

The symposium and exhibition at the hop-field in Mutějovice can be seen as the pinnacle of the collective effort during that period to work with an exterior space – whether it be in an urban public space or in nature. Land art, still relevant at that time in Czechoslovakia, became for the unofficial scene one way out of the difficult totalitarian situation. It also made it possible to define itself vis-à-vis the anachronistic official art as one of the most progressive art forms of the previous decade and to capitalize on the peripheral position of unofficial art, which, since the early 1970s, had naturally fled to unmonitored natural environments. The Hop-Field event symbolically brings this tendency to a close, with the Czech unofficial scene subsequently moving to low-profile institutions where, thanks to the gradual cultural thaw, they were able to carry out more gallery-type projects.